We made the most of our posh hotel room and checked out at 11, and walked 50m in sweltering hot heat to our next hotel, we were both sweaty after that!

A day of food awaited us, so to walk off some calories we wandered down the esplanade, which in usual towns is something lovely, however the part we stared at was not that scenic, overlooking the container ships, we had to dodge the unsecured, uneven concrete pavement, deep smelly drains, and general rubbish that was in our way.  Thankfully we got to the nice bit without any injuries, and saw some tourist sites, see below!

Obviously, after that short stroll, it was time for more food, and what better than tandoori chicken and naan from Restaurant Kapitan ….oooooh, it was delicious. It was full of locals, some of whom looked a little worse for wear after a heavy Saturday night, which was comforting!

Today was the day for all the Chinese new year celebrations in Penang, loads of roads had been blocked off, several stages set up for folk stories, dancing and other Chinese NY celebrations.

We did see some massages going on, using meat cleavers!
*please don’t try this at home*

There wasn’t much else happening so we wandered back to our hotel, stopping at the Chinese hotel we stayed at 15 years ago for an ice cold beer and a reminisce. And watched a couple of pretty feral travellers request a room there , they went to view it, came down and walked out! Our standards must have been pretty low last time!

We thought we would go and see what was happening for the celebrations, so made it to the closed off area and found it absolutely rammed with Chinese, and other revellers. When you went past the stages they were screaming Chinese into the microphones which was enough to send you deaf! It was so congested, and there were no beer stalls, that we decided to decamp to a bar and take time out! 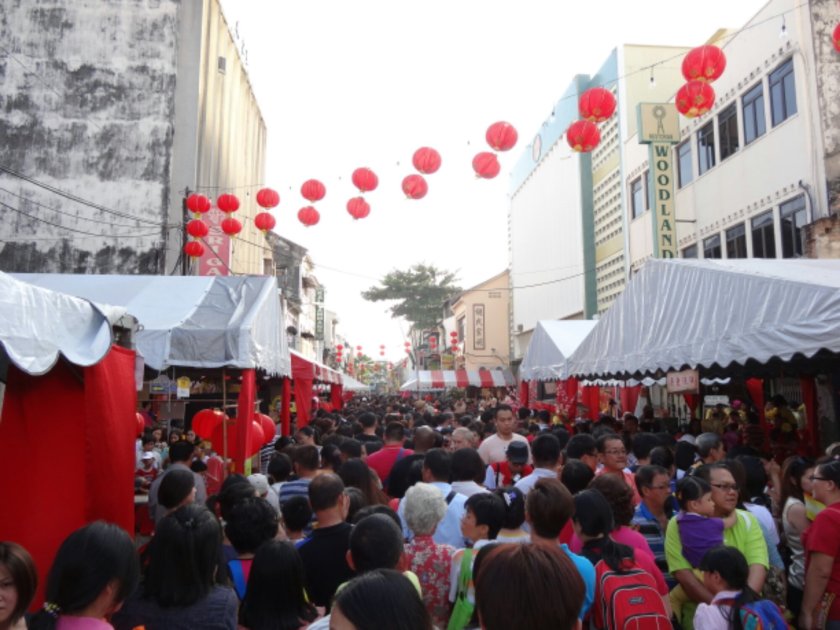 Had a couple of beers talking to a New Zealand traveller, who is off to South America next month.

Guy wasn’t feeling 100%, we are not sure if it is malaria, avian flu,  viles disease or just a slight cough, so we decided to call it a day and walked down the road to our hotel. It must have been about 8pm, and there were some very ‘made up ladies’, obviously feeling the heat as they were scantily dressed, waiting around for a lift or a friend to pick them up for the night, I assume to go home, who knows! They didn’t hassle Guy, so that was good! (Some of them had very masculine features.)

Guy felt up to watching Liverpool vs baggies, then we had a restless nights sleep due to the karaoke bar across the street which went on til 3am!