So, yesterday I was rocking the shabby chic wear your husband’s trousers look, as all my clothes were being washed to get rid of the bed bug that kept biting me. So putting on clean, fresh clothes that fitted was a joy. It is the little things in life which make you happy.

We decided to walk to Dostoyevsky’s house today, it wasn’t far (by St P standards) and it was ace. Although not the actual house as it was rebuilt and refurbished according to photos gathered it was pretty atmospheric and you got to see his hat! Guy was in his element.

After that we went to the church round the corner. Rules on entry are that lasses have to cover their heads and wear no lipstick, guys have to take off their bowler hats. It was full of gold, lots of gold, and icons, lots of icons, as you would expect from a Russian church.

By now it was lunch time and we hit the Soviet canteen, school style with food being kept warm (tepid) over water baths. I had potatoes, veg (well boiled) and fish,  Guy did better with his rice (saffron, Uncle Ben style) veg (well boiled) and chicken with cheese and tomato topping, with cup of green and earl grey tea for 530 roubles (about a fiver) and no stomach issues have been encountered – result! 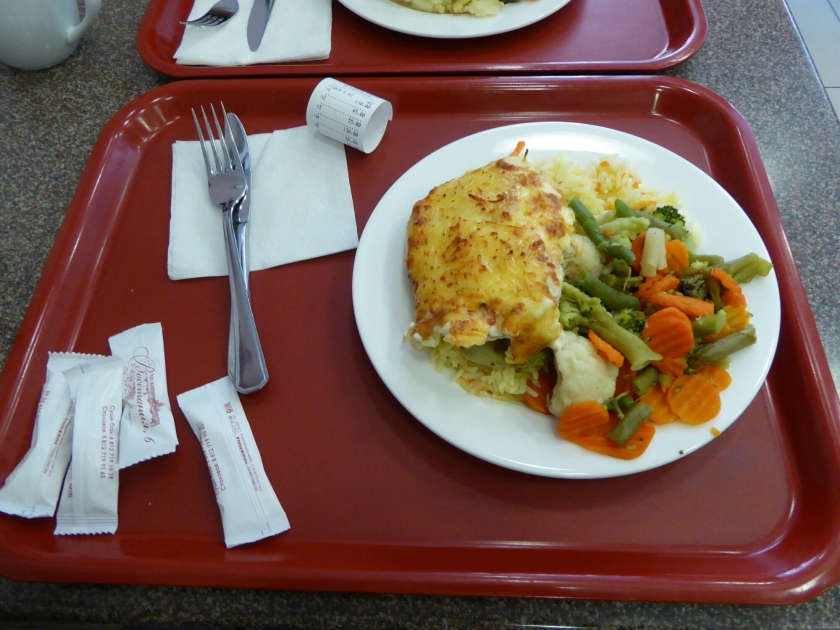 Then off to State Museum of Russia, full of Russian art, folk art, and modern art. It was so much better than the Hermitage…..which you are not supposed to say but it had more interesting exhibits and showed Russian art through the ages. The modern Soviet realism was at the end so we were weary by then but still found it facinating. (BTW I now know it was Soviet realism on talking to a fellow hosteller who knows about these things).

Time for cake and tea, so we went to Ivans cafe and had cake and tea. Although we felt a little hard done by as the two couples either side of us were having a meal with what seemed like about 100ml of vodka to have shots of through the meal.

On the way home we passed a fancy looking wine bar and couldn’t resist a cheeky glass of Georgian wine. It was the only local wine in the menu, the rest were all well known brands back home that you would find in the mid range section of a supermarket, only much more expensive!

Having a taste for Georgian wine we went to our nearest bottle shop and after quite a lot of deliberation chose a Georgian red to drink at the hostel, whilst catching up with the blog and the latest Dostoyevsky book.

As it was Saturday night we thought it would be rude not to go out and experience St P nightlife, so we wandered up the street looking for a bar that was supposed to do live music,  o.k. it was also an English bar, however we couldn’t find it so ended up in a Russian cocktail bar, playing English indie music, drinking red wine which came with its own canapes, Spanish wine had chicken liver pate tart case and South African pinotage accompanied by prunes! Dinner sorted we paid up, got a chocolate with the bill, and got back into our bed, 7ft in the sky, with no casualties!