We have booked onto a five day, four night tour into the Mongolian Steppe to see wild horses, ancient Buddhist temples and the ancient capital of the Mongol horde founded by Chenggis Khan. We will be staying each night in a ger (yurt) with a local family.

I revel in the luxury of a shower and pack and the hostel owner introduces us to Badz, our English speaking guide. We wander downstairs and outside head towards a Soviet 4×4 called a UAZ where we are introduced to Moogii our driver.

Moogii loves his van. They are one.

We head out of Ulaan-Baataar at rush hour named after the adrenalin rush you get and we stop at a supermarket on the outskirts. It is recommended to take gifts to the families you stay with so we buy 3x bottles vodka (dad), 3x tea towels and soap (mum) and 5x bags of sweets (kids). We have no running water for 5 days so we also buy wet wipes and another bottle of vodka for ourselves. We are basing our hygiene routine on the Glastonbury model.

The traffic thins, the buildings become more run down, then we pass multiple industrial plots and finally we leave the city behind. We are able to see a black layer of pollution against the hills created by fuel burners in gers in the outskirts.

After around 80k we swing off the main road and bounce down a dirt track for another 15k until we are inside Hustai national park. Badz spots some Przewalski wild horses on the horizon so we stop and head towards them on foot. We pass marmot burrows, some of which are sealed with their own dung showing they are hibernating for the winter. We manage to get to within 250m of the stallion and his two mares before they run off. 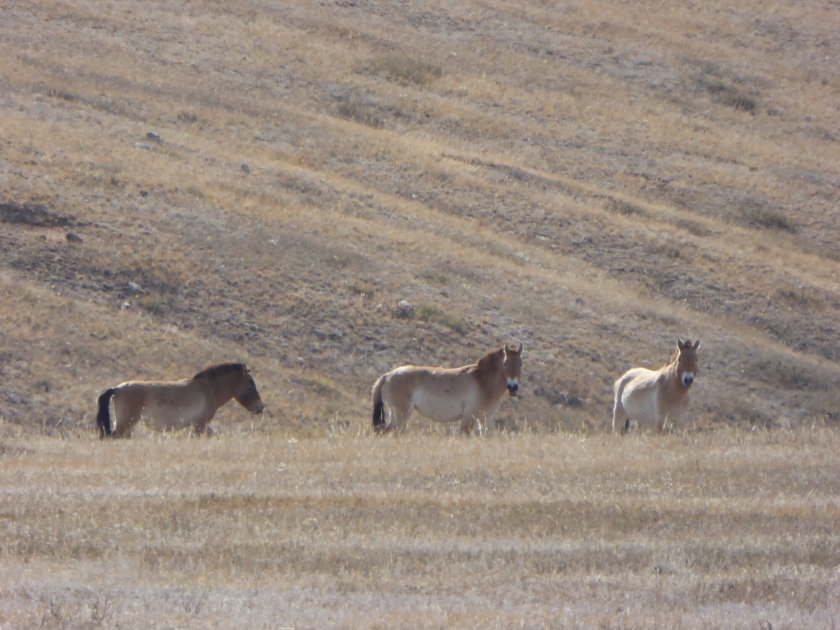 Down the valley, shaped like an arrow, marches a flock of sheep and goats with cattle to their rear and a few dogs either side. We stare transfixed as they seem in perfect formation hoovering up grass as they shuffle forward.

Back in the van Moogii demonstrates his superb driving skills as we bounce back down the dirt track to the tarmac highway. 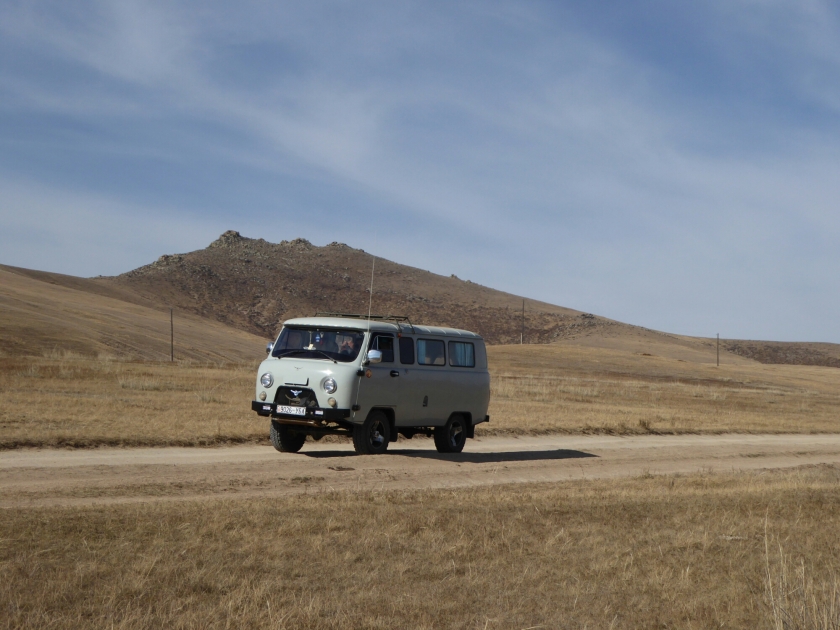 Eventually we stop for lunch of sizzling beef and peppers with rice at a service station, then its back on the road heading west.

We doze a bit after lunch but the scenery stirs us. We are driving down vast flat plains flanked on the horizon by shadowy mountain ranges. The road is dead straight disappearing to the vanishing point. This is the Mongol steppe; beige scrubland underneath bright sun and blue sky. It is an epic landscape.

Moogii swings off down another dirt track without troubling the brake pedal and we bounce around for a while enjoying the scenery. In the distance we see a camp of tourist gers and our hearts sink. We head towards them but out of no where we take a hard right and drive over a dry river bed through a pack of camels onto another track and a while later we pull up at three gers and a stable.

The mother and young daughter emerge from the central ger looking ruddy and rosy cheeked. They smile and we shake hands and say hello and we’re invited into a toasty tent. In the centre is a cast iron hearth with a chimney pipe. There are three beds arranged around the outskirts of the tent interspersed by two cabinets, one used as a shrine and one used for kitchen equipment which has a small table next to it. One of the beds has a rope tied to it and on the other end is a toddler, crawling around safely away from the hearth. Dad is lying on the floor snoozing. They explain that he is ill but after we leave our guide reckons he has a hangover. We smile at each other and Mongol is spoken around us. I am offered snuff which is a traditional male greeting on the Steppe. Badz demonstrates by taking a pinch from the bottle onto his right hand, rubbing most of it away with his left index finger and then sniffing nothing from his left index finger. I copy him. Black Tea with salt is served with dried sweetened yoghurt.

A family helper arrives and we are led out for a camel ride. The family look on grinning as we mount them and are thrown forwards and backwards as they rise. Despite my English reserve and in spite of my cynicism I really enjoy it. A bright full moon rises behind a rock escarpment as we plod up rippled sand dunes with the Steppe tinged orange from the glow of the sunset behind us. A truely magical moment.

After a graceful dismount, we are back in the family ger watching mum cook goat stew in a huge wok on the fire. In front of the hearth is a box of dried animal dung which is used as fuel, on top of which sits a pile of lamb fat. Mum is adding bits of meat to the boiling water and things she made earlier, like blood sausage and inards sausage. A dough is rolled out and placed onto the stew and the boiling liquid ladelled over it to create a giant noodle. Eventually its ready. Mum removes goat pieces from the wok to a plastic washing up bowl and carves a few bits off to throw into the fire as an offering.

Finally, tea is served and the expression ‘in at the deep end’ springs to mind. We have goat kidney, lung, liver, blood sausage, inards sausage, ribs with a potato and some noodles. The expression ‘in for a penny, in for a pound’ springs to mind and I start with the inards sausage. My senses are assaulted by rich flavours and unusual textures that I’m not used to. Aware that I don’t want to appear rude, I’m conscious of my facial expressions as I chew and swallow. Things become more familiar with liver and kidney and I like the noodle so much I eat Al’s too.

Al dishes out the presents to the family and the vodka is opened. The traditional way to drink is from a small round saucer that the host fills and the guests pass round. You drink using your right hand and toast ‘tok tooy’. The dad starts but I get the impression it is mainly for our benefit to kill any stomach bugs as it’s mainly us who drink it. We chat to Badz who asks us how old we are, we tell him and he exclaims ‘Wow, same age as my parents’. 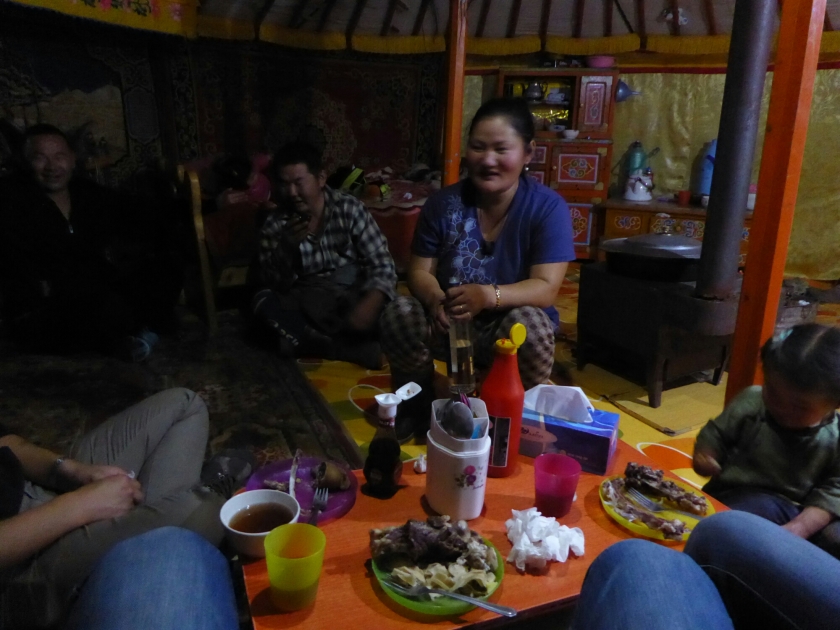 The bottle gets emptied and its dark outside so we hit our ger which heated by burning animal dung is about 30° and home to a thriving bluebottle colony circling round our lightbulb powered by a car battery. I’m told that to turn of the light I have to pull the cable from the battery and don’t touch both connectors at the same time.

Before turning in we head to the long drop bathed in moonlight serenaded by lowing cows.

Moogii slept in his van. Inseparable.