Today we strolled around some of the sights we saw in 1999 but started the day in a coffee shop, something new. I can’t remember where backpackers and westerners would spend their time when we were last here, probably hostel bars, but they certainly would not be drinking machiatos while using free WiFi on their smartphones in stylish coffee shops. In the dark recesses of the past, I remember people would read books and chat to each other swapping travel stories. Its much easier to be introverted and aloof nowadays.

Anyway, I enjoy my machiato and sit staring into the middle distance, appearing aloof without using my smartphone. You can’t sit around stylish coffee shops all day though, especially if you’re married to Alison, who soon demands we actually do some tourism. 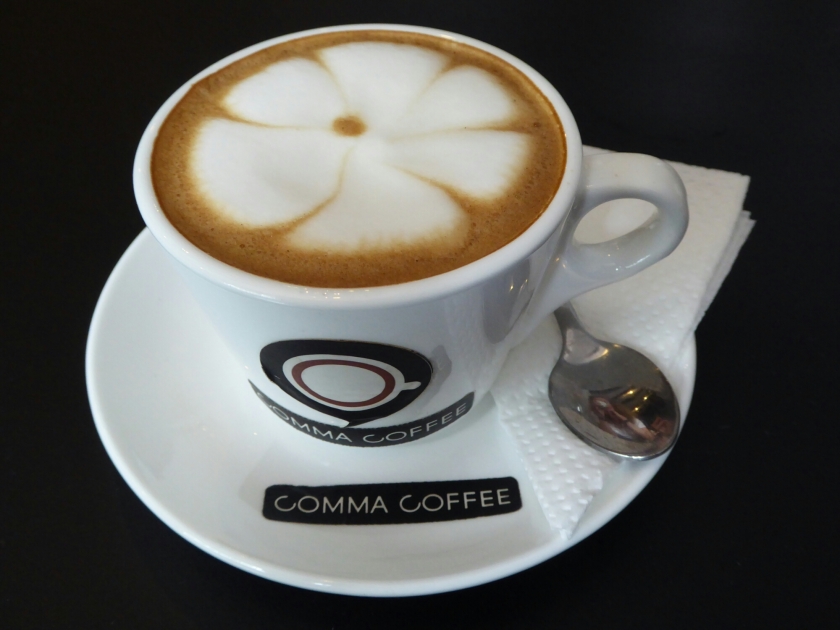 We walked past the Presidential palace and down the main road to the Patouxay monument, built from US cement intended for a new airport in 1969. We selfie, then are asked to be in a photo, then are asked to take photos. Its a snap happy time.

After a plate of holy basil fried chicken in a workers cafe, we walk to Pha That Luang, the most important national symbol in Laos. Eighteen years ago I took a picture of a monk sat mediating on its wall which I love enough to hang in my hall at home and I want to revisit the scene. Unfortunately, its currently covered in scaffolding so my hopes are dashed on the rocks of reality.

We walk into a temple next door and sit quietly at the back while a ceremony unfolds under the Buddhist images. We start to feel a bit self conscious as it appears to be a monks initiation with his family attending, but as is often the case in south east Asia, an unexpected welcome gesture happens as a bloke brings us a bottle of ice cold water each. We thank him.

We walk back into town on an unconventional route, looking at a bit of light industry as we go. It may not be top of the tourist sites but we like to see all of a country, not just the shiny bits. Learning about a foreign country isn’t just monuments, waterfalls and statues, back street life and food is also interesting to us.

We near the hostel and have another memory to revisit, a whisky related one. We previously had tried Black Horse Laos Whisky, my Dad used to work for Lloyd’s bank whose logo is a black horse, so it seemed appropriate! We found a shop which sold it for 12,000 kip or £1.20 a bottle so bought one. After a sundowner beerlao or two it was opened and swigged. The soundtrack to this whisky in 1999 was U2’s Rattle and Hum so the headphones come out and we indulge in Laos whisky and Irish blues rock. Its an understatement to say we have a good time.